Adrenal and Thyroid response to stress
​

When our hypothalamus - (the internal and external monitoring system of our brain) detects stress of any kind, be it physical, emotional or environmental, it springs into action in the following sequence:
​ 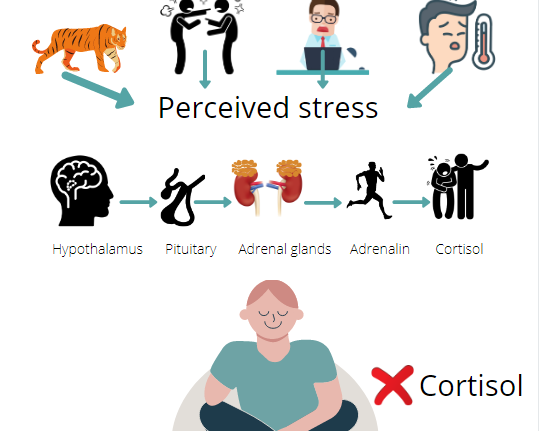 The hypothalamus sends a hormone to the pituitary gland (also in the brain) to communicate to the adrenals - two walnut shaped glands that sit on top of each kidney.
The adrenal glands will secrete adrenaline in the immediate moment of the stress stimulus to help protect the body by either running away, or fighting.  It causes our heart rate to speed up and pump strongly because it also raises our blood pressure.  It causes our pupils to dilate and breathing rate to increase.  Muscle fibres become activated by a flood of calcium in the cells.  The adrenaline puts a direct halt to digestion and reproductive organs, as they are the least priority when you are trying to run away from danger!

Cortisol increases blood glucose by releasing stored sugars.  This is to give the body energy to burn to run away.  It also has some other roles in the immediate situation, but unlike adrenaline, which only is released to the stimulus, cortisol is released for a sustained amount of time after the danger has passed.

Once the person addresses the situation and removes themselves from danger, the cortisol helps the individual return back to normal.

Today, the demands on our adrenals are almost constant.  We aren`t running away from tigers, but we are bombarded with stressful events throughout the day that have the same physiological effect on the body.

Instead of returning back to our normal balanced self, like the diagram above, we are living in a constant cycle of adrenaline- cortisol,  adrenaline - cortisol. 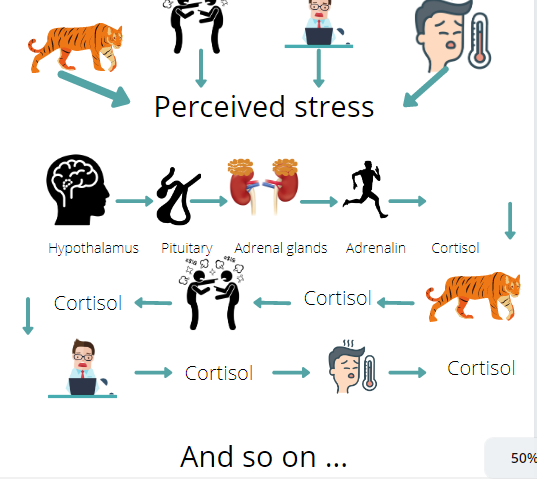 Some people are very resilient to living in this way and can do so for many, many years without any problems.  Other people, for a variety of reasons, are more sensitive to the effects of long - term cortisol release.  For these people, eventually, the adrenal glands begin to secrete less cortisol as they find it demanding to keep up with the constant requirements for more cortisol.

​Cortisol has another role in the human body. It is a hormone that helps us to be more alert and feel less sleepy.  It is a surge of cortisol in the early morning that helps us get up out of bed. It works in harmony with our circadian rhythms and with melatonin, our sleepy hormone.

If we are no longer producing enough cortisol, (because our hormones are tired)  we are going to feel fatigued and less alert.

The hypothalamus - our monitoring system in the brain - senses that we are running low on energy.  It is very clever and knows that it needs to conserve energy, so it goes to the metabolism control  - the thyroid - and turns it down a notch, like you would your thermostat, if your heating bill was too high. 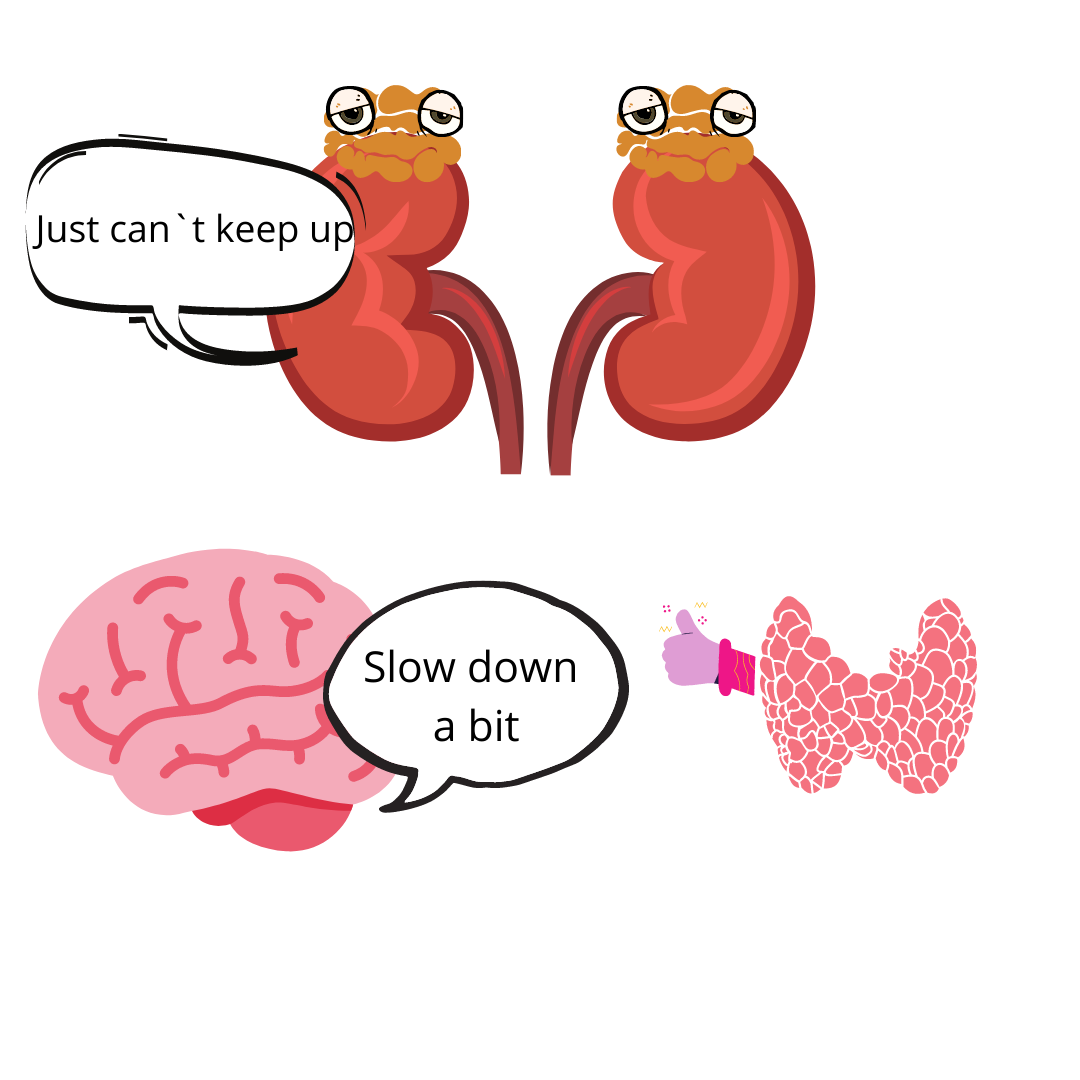 When this happens, it may not show on a blood test as it is at a subclinical level.
Also, when we have high cortisol the Thyroid produces something called reverse T3 which isn`t tested for by the GP.  Reverse T3 stops T3 being absorbed into the cells.  Doctors tests will detect T3 and assume you have enough of the thyroid hormone.  The problem is that Reverse T3 (rT3) blocks the cells from using the T3 so you will have symptoms of hypothyroidism whilst having blood tests that appear normal.
In Naturopathic medicine, we test for the full thyroid panel, including rT3. 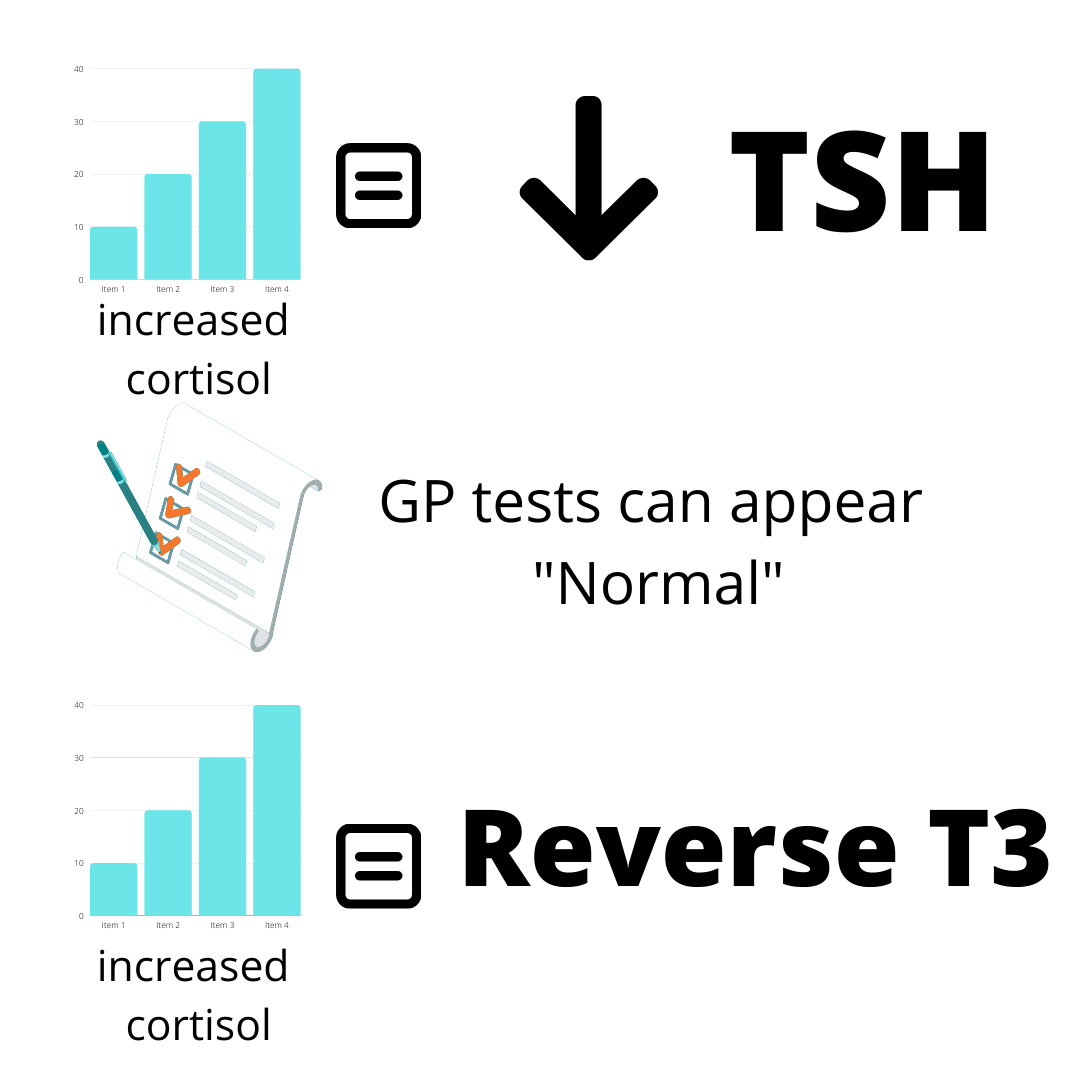